All week leading up to the 6th Annual Winship Cancer Institute 5k race with Emory University, some friends and I participated in the Workweek Hustle Challenge via Fitbit. By the way, I won the challenge (80k plus steps).

I was extremely tired and wanted to quit, but I couldn’t  because I usually keep my word. Friday came and it was time for me to help with registration. After hours of getting participants ready for the race it was time for me to head on home. My feet were tired and my legs were aching, it felt like I’d participated in several cross-fit and boot-camp classes. I finally made it home to rest and thought to myself “what have I got myself into, with this race?” Not only had I planned to participate in the 5k, I offered my services to the registration table prior to the race.

MORNING OF THE RACE…

The alarm goes off, its 5am. I’m lying in bed thinking, “I don’t want to go, I can’t get up, I’m soooo tired!” I honestly felt if my friend Holguine weren’t participating in the race with me, I would’ve thrown up the deuces and gone back to sleep.

Once we arrived on campus, I felt energized and excited to be apart of something meaningful. I was extremely happy to have followed through with this years 5K.

I’ve participated in plenty of cancer related and non-cancer events, but for some reason this one felt much different. At this point I couldn’t figure it out, so I kept working. 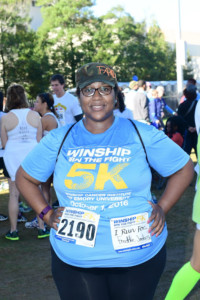 It was time for me to get in “FORMATION,” (all you Beyoncé’ fans aka the #BeyHive, I finally said it…LOL) for the race. The Grand Marshal fired the race shots & we were off. I started to run, yes I said RUN!!! It was a slow and steady pace, but I ran.

The first mile was something else I tell you. No Crystal C. Jordan did NOT run that entire mile, but she did have a constant jog which is more than she’s ever had in her adult life. I was proud of myself.

As mile two approached, I was tired and felt I couldn’t go on. I wanted to stop; actually I wanted to lie down for a little while. I kept thinking, “where’s the third mile marker, cause this “sista” isn’t going to make it!” Holguine and I kept going; of course we’re walking at this time. I wanted to complain, but I didn’t. Thinking about my father, uncles, aunt, friends, others who fought and or were fighting cancer, I had to keep going.

I thought to myself, how dare I complain about a three plus mile race “I” volunteered to be apart of when NO ONE decides to be diagnosed with cancer and to go through numerous surgical operations, chemo, radiation, losing their hair, finger nails, loss of feeling in their finger tips or dealing with excruciating pain that most couldn’t imagine all the while praying to their God in hopes of becoming cancer free.

As one of my favorite entertainers, Sean “Puff Daddy” Combs would say; “Can’t Stop, Wont Stop!” That’s what I did; I kept going. Sure my legs and feet were aching, but I knew I could do this.

There was so much support and encouragement out. From route monitors to all the people on the sidelines, & supporters cheering everyone along the way. I gained more energy and became a little emotional. Why you may ask? For the simple reason, we all have dealt with some type of pain, or disappointment, publicly or privately and to have someone, for that matter a stranger who doesn’t know your struggle giving you words of encouragement and support. My soul filled with so much joy and gratefulness.

Whoever said support from others isn’t necessary for one to succeed. In my opinion, they LIED!!! There’s no one in this world that gained success on his or her own. EVERY person needs to “hear “words of encouragement throughout their individual journeys. If you disagree with that statement, please bring a list of names and their solo accomplishments.

MILE THREE IS NEAR… 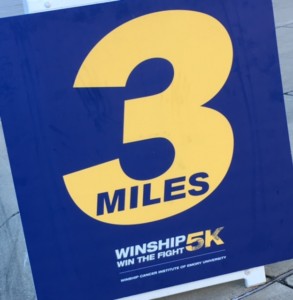 Finally I made it to mile three and could see the finish line near. I finished the 5k in less than an hour. Many of you may say, “it took you that long, or I wouldn’t share that time.” That’s YOU because I’m PROUD of the time I finished with. All because I was apart of something meaningful and that I ran/jogged more than I’ve ever done. So this was actually a milestone for ME.

During the race I felt empowered, loved and grateful. With so many unpleasant things’ happening on a daily, I was proud to see there wasn’t any division. Everyone who came out was supportive of one another. We were in a fight together, the battle against cancer. One that I pray will be over sooner than later.

I Am Not My Hair!

Fact or Fiction: Myths About Cancer

Lets get in formation! I remember this day, thank you for sharing your experience and bringing awareness to the Winship Cancer Institute. I’m looking forward to the next 5k.

Crystal, you are doing amazing things by spreading knowledge and encouraging individuals about cancer. Continue to share helpful information and be the angel that many need by their sides et al.

Thank you Mrs.Roberts for taking time out of your day to check out my blog. I plan to provide as much knowledge as I possibly can.

Yes!!!! This was an amazing read! Keep up the good work. #CantStopWintStop

Thank you, Letitia for reading my story. Be sure spread the word about my blog and be sure to subscribe to be the first to get the latest!

David & Goliath: The Fight for my Trademark