Age Ain’t Nothing, But A Number… 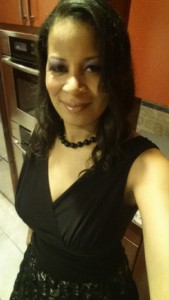 Recent news from the American Cancer Society (ACS), stating that women should start getting mammograms at age 45 instead of 40 has resulted in some confusion and uncertainty about clinical breast exams and mammograms. Maiya Hayes, who doesn’t have any family history of breast cancer was diagnosed in 2008 with stage 3 breast cancer at age 30. Hayes is living proof that ACS truly missed the mark with their “New Guidelines.”

How was the cancer initially detected? (i.e. through a BSE, a CBE or an annual mammogram)
I discovered the malignant tumor in my right breast while doing a self-exam in November 2008. I’ve been doing self-exams for years because I had a benign breast tumor in that same breast when I was a teenager.

How did you feel when you first received the news?
Honestly, I didn’t really understand how serious my situation was. So I didn’t cry or have an intense emotional reaction. I knew cancer had the potential to kill me, but because I was only 30, I didn’t think that would happen. I was naive, to realize how close to death I had come.

I knew I would need to have surgery, endure chemo and radiation treatments, and take some time off from work. But I didn’t realize I would end up being on medical leave for almost seven months.

Did you face any challenges during your treatment process? If so, how did you overcome them?
At first, my HMO insurance wouldn’t cover the anti-nausea meds that kept me from getting ill during my chemo treatments. The HMO wanted me to use a cheaper drug that didn’t help me at all. So for the first two months of my chemo treatments, my mom had to get my prescriptions filled via a mail-order pharmacy in Canada. Because Canada sells the drugs at a much cheaper rate than American pharmacies. And eventually after my mom wrote a letter to the HMO company, they finally agreed to pay for my anti-nausea meds.

How has breast cancer changed your life?
My life is completely different in all aspects…

What would you tell your younger self about cancer?
I would tell her that anyone can get cancer at any time. I would also tell her that cancer affects your mind and emotions just as much as it affects your body. So even when you go into remission, you’re never the same person you were before your diagnosis.

What message would you like to provide women/men in the community?
I would tell people in the community that no one is immune from getting cancer. Despite all the articles that say you can prevent it by eating healthier or exercising or”doing this” or “doing that,” there’s no absolute way to avoid getting cancer. It’s a complicated disease caused by many factors that are out of our control — like genetics and the environment. And statistics are meaningless because there’s a lot that the medical community doesn’t know about the disease. So it’s important to get your annual checkups and be aware of any changes in your health. Because all you can do is be vigilant.

The American Cancer Society just released an article/statement recommending the age for people to get a mammogram at the age of 45, if no family hx of breast cancer.  What’s your take on this?
The new guidelines made me furious. I took it as a personal attack against me and the young friends I’ve lost to breast cancer. My friends and I are proof that people under age 45 who have no risk factors for breast cancer get it.  I worry these guidelines will convince health insurance companies to stop covering yearly mammograms. And that would force many women to choose between paying $300 for a test that may or may not detect cancer, or saving that money to cover other life expenses.

If my ob-gyn hadn’t performed those exams on me, then I wouldn’t have learned how to do self-exams. And if I hadn’t done a self-exam back in November 2008, then I would’ve had terminal breast cancer by the time it was detected. 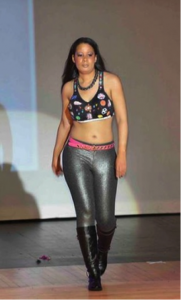 This year, Maiya participated as an art-bra model in Bras For A Cause, an annual fundraising event for Gilda’s Club Metro Detroit. The event involves breast cancer survivors modeling art bras, and it raised more than $100,000 for Gilda’s.  She also served on the committee that helped organize the event.

The Big C: A Journey To Survive

Great blog! Age really ain’t nothing but a number!