Sharon Jones, an iconic Grammy-nominated soul and funk singer who rose to fame relatively late in life, died on Friday of pancreatic cancer. She was 60.

Jones, known for her high-spirited live shows, passed away at a hospital in upstate Cooperstown, surrounded by her bandmates, according to a representative.

“We are deeply saddened to announce that Sharon Jones has passed away after a heroic battle against pancreatic cancer,” a statement on the singer’s website said. “She was surrounded by her loved ones, including the Dap-Kings.”

Born in Augusta, S.C., Jones was raised in Bedford-Stuyvesant, Brooklyn.

Jones struggled to earn money as a gospel singer and session vocalist in her 20s and 30s, and worked for years as a correction officer at Rikers Island and drove armored cars for Wells Fargo Bank.

Jones befriended Gabriel Roth, one of the organizers of the Fields sessions.

Roth later started Daptones Records and made Jones one of his top stars.

She earned critical acclaim as the fiery frontwoman of the group Sharon Jones & the Dap-Kings, blowing away audiences with her sweet, soulful vocals and her tireless stage presence. 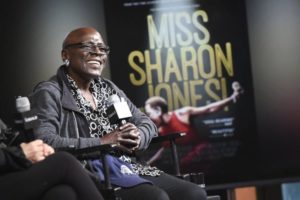 ones was the subject of a documentary released this summer, “Miss Sharon Jones!” (MATTHEW EISMAN/GETTY IMAGES)

The band released seven albums together smothered in guitar licks and horn blasts straight out of the ’60s and ’70s.

She was nominated for her first Grammy in 2014 for best R&B album for “Give the People What They Want.”

Jones lived with her mother, Ella Mae Price Jones, in Far Rockaway for years, even after she became a sensation in the soul revival scene.

“The fabulous Sharon Jones has passed tonight she & her band The DapKings made great music together & she sang her butt off. Condolences RIP,” Whoopi Goldberg tweeted Friday.

“#RIPSharonJones – You are incredible and mighty. Condolences to your family,” guitarist Nile Rodgers wrote.

The Roots drummer Questlove shared a photo of a defiant-looking Jones and simply wrote, “Thank You Sharon. Thank You. #2016.”

The sultry singer was diagnosed with pancreatic cancer in 2013, but went into remission and continued to tour and record music. The cancer returned in 2015 and spread to other parts of her body.

Jones was the subject of a documentary released this summer, “Miss Sharon Jones!,” that chronicled her battle and initial recovery from cancer.

Bride Weds in Hospital So Father Can Attend